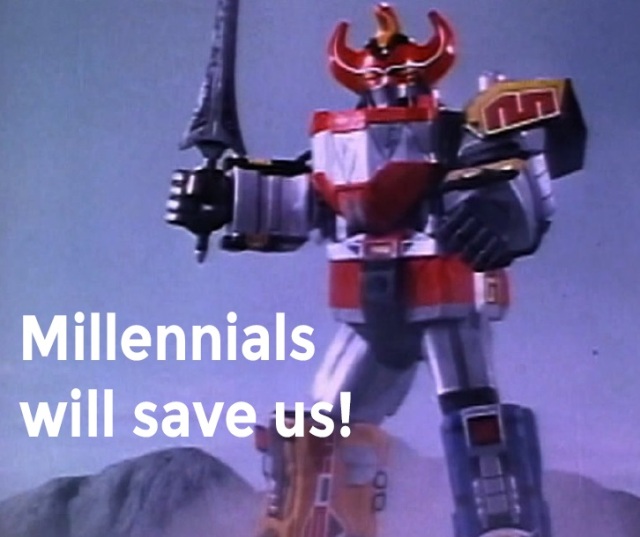 O.M. God. These creatures of the digital tar pits are humanity’s saviors. They speak differently than the rest of us. They dress differently. They know life hacks. And they shoot Periscope videos of themselves doing it. Like a phoenix dressed in 80s fashion rising from a pile of entitled, home-schooled ashes, Millennials hold a fist full of dollars and aren’t afraid to spend them. Praise them, lavish them with a weird sense of high self-worth, for when combined – like Voltron or Megazord – they are the second coming.

Just knowing how to ‘scope is a feat. For the rest of us, it’s just another social media platform that we might someday explore when time and the non-digital world allows (IRL), but Millennials make the time for these important things. Trump memes won’t post themselves. Millennials make the time to change the business world to suit their personalities. First there were slackers, but Millennials; by God, they’ve turned the slacker life into a series of well-shared LinkedIn articles.

And Millennials share videos of interesting things Generation X-ers scroll right past. That video of the Volvo in the middle of a snowy field being mauled by that giant European backhoe? It’s viral, and obviously staged as so many are, thanks to them. When a video goes viral, as we all know, lots of people watch it and that means… it gets a lot of likes, which means a lot of people see it. And that translates into something. Trusted content? Not really. Something Boomlets are into? Who the hell are they? Do “likes” translate into advertising dollars per impressions? Sure. In a vague, click-bait kind of way. Is it all about money? Always. Even for Millennials, but they’re cool with it, so we should be too. They have money to burn. Everyone says so.

Baby Boomers love them. They’re the new Me Generation, so similar to their free-loving grandparents back in the day, but hip to tech and stuff (they have selfie sticks). And they aren’t afraid to talk about their needs (because we’ve told them they are special), their issues (because we’ve told them they are special), and their Go Fund Me accounts (because they think they’re special). The generations that have come before have put all their hopes for the future, not to mention the task of fixing the present planetary issues, on you. As Millennials are so fond of saying, even when not thanked first, you’re welcome.

The hope of the future hinges on what you post (say) next.

6 thoughts on “Who doesn’t love Millennials?”