Check out photos of recent events in Monterey County below! Big thanks to Ace Hardware in Carmel for hosting us Arcadia authors, to Old Capitol Books for hosting a writing workshop for me and Dietrich, and for selling books at the Noir at the Bar a few night’s later. Thanks also to our Noir hosts, East Village Coffee Lounge!

(Sept. 24, 2018) Look for some cool events this October on the Monterey Peninsula. Cool for writers and fans of the written, and spoken, word at least. And who isn’t a fan of that?

October 21 – I’ll be joining a number of authors in Carmel on Sunday, October 21, from 1-3 p.m. for a book signing event featuring local authors and historians. More details to come, but it sounds like a great place to find some early Christmas presents for the bibliophiles in your family. I’ll be ready to sign my recent book Pacific Grove Museum of Natural History! The event will be held at Carmel Ace Hardware, located at 290 Crossroads Blvd, Carmel-By-The-Sea, CA93923. 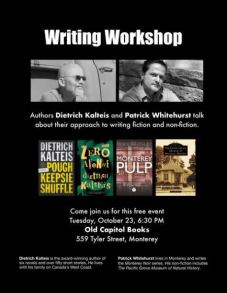 October 23 – Want to learn more about the craft of writing fiction and nonfiction? Author Dietrich Kalteis and I will hold a workshop on that very subject Tuesday, October 23, at 6:30 p.m. at Old Capitol Books in downtown Monterey. We’ll discuss writing style, guidelines, and the research that goes into works of fiction and non-fiction. Old Capitol Books is located at 559 Tyler Street in downtown Monterey. Learn more here!

October 26 – Noir at the Bar returns to the Central Coast this month! This year’s Noir will be held at the East Village Coffee Lounge, at 498 Washington Street in downtown Monterey, beginning at 7 p.m. Books will be available for purchase thanks to the awesome folks at Old Capitol Books. Donations will be accepted at the door, benefitting the Central Coast Writers group! It’s a sweet lineup of authors too: Terry Shames, Kris Calvin, Tom Pitts, Rob Pierce, Susan C Shea, Mark Coggins, Morgan Boyd, Dietrich Kalteis, and me! Get more details here! 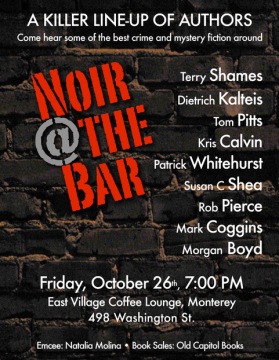 It’s going to get mysterious and maybe even a tad illegal down in Monterey on Friday, October 26, at the East Village Coffee Lounge. Look for trench coats, a suspicious marine layer rolling in like spilled pea soup, shady-looking folks in sunglasses, or just a gaggle of writerly types skipping along in the fog. When you see it, you’ll know you’ve arrived.

Noir at the Bar is back in town.

Thanks to crime fiction author Dietrich Kalteis, this year’s Noir is shaping up to be a killer one. He’s organized a sweet lineup for this year’s event, including authors Terry Shames, Kris Calvin, Tom Pitts, Rob Pierce, Susan C Shea, Mark Coggins, Morgan Boyd, Kalteis himself, and me! The lovely Natalia Molina will emcee the event!

This year’s Noir will be held at the East Village Coffee Lounge, at 498 Washington Street in downtown Monterey, beginning at 7 p.m. Books will be available for purchase thanks to the awesome folks at Old Capitol Books. Donations will be accepted at the door, benefitting a local charity! 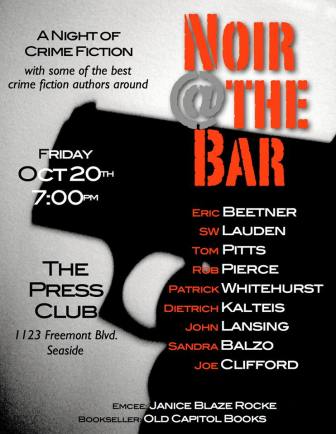 Picture yourself in a dimly lit room. A light bulb hangs from the ceiling, swinging slowly to and fro, as if an ethereal skeletal hand had reached down from the inky shadows and tapped it. Beneath the light are a series of faces with dark shadows for eyes and grim, black lines for mouths. The grimy bulb swings overhead. The faces are there, then swallowed by darkness, then appear again, under the dancing, pale glow. This assembly is here for one reason and one reason only.  And there are laws against it.

When you picture an evening of crime fiction called “Noir at the Bar”, that’s how I picture it going down. It won’t be like that. Well, maybe it will be. Who knows? Maybe it will go down like a tea party in a Hercule Poirot novel, or turn into a backstage party at the end of a Rage Against the Machine concert on the eve of a government revolution? Or we’ll pose like we’re trapped in a Hopper painting. Perhaps we’ll just compete for who does the best “drunk Sarah Huckabee Sanders” impersonation?

My money’s on Dietrich Kalteis.

Dietrich is an amazing author and one of many who will take part in the Friday, October 20th, Noir at the Bar at the Press Club in Seaside, California. Starting at 7 p.m., and emceed by Janice Blaze Rocke, this event features not one or three, but nine incredible writers all in one place, and all ready to spill the beans on crime fiction. Authors for this event include Eric Beetner, SW Lauden, Tom Pitts, Rob Pierce, Dietrich Kalteis, John Lansing, Sandra Balzo, Joe Clifford and myself. Old Capitol Books will bring books to buy and the Press Club will provide the rest.  What’s not to drool about with this lineup?

The Press Club can be found at 1123 Fremont Boulevard, Seaside, CA. They say the road construction will be done by then, so let’s celebrate. If it isn’t, come anyway, just bring a flask.