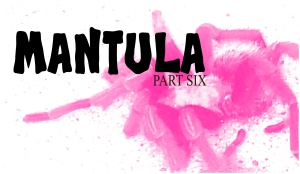 Gagged on pop culture, polluted by

Besides figuring out how to speak telepathically, Glenn knew a thing or two about my predicament, which he shared, but didn’t seem as bothered by it as me. He’d been in the body of a quail for almost a year he told me. I sat there, under the bushes in the meditation garden, and let him talk. There was no way I’d remain a friggin’ tarantula for a year. I’d do something else before that happened.

ManQuail spurted out his story like a broken fire hydrant. He spewed the information more than he told it.

“It takes some getting used to, of course. But it ain’t all bad, man. When I woke up in this quail body I found I didn’t want meth any more. I had no cravings. I wasn’t grinding my teeth like I used to, and I wasn’t scratching at my arms and face like before. I kept thinking mosquitoes, or ‘no-see-ums’ were attacking me. I don’t even have teeth to grind now, but that’s not why I don’t grind. I suppose I could grind my beak. But here’s why: all the nasty shit was just gone. I don’t need to touch that shit ever again.

“Do I miss my human body? Of course, but not as much as I did at first. I was a mess, man. I had sores, lost a shit-ton of weight, had more missing teeth than a hillbilly, and I didn’t give a damn. I lived at home with my mom and dad. They have a big old trailer over in Camp Verde. When this happened, I was right on the verge of stealing all the money they had in the bank. I really was. I went to bed one night like always, on my single mattress that I slept on in the corner of my room, thinking I’d take their life savings the next day, maybe even off them, and live in the trailer by myself with their money. It wouldn’t be hard to get my hands on their credit and debit cards. They even let me bank for them before I got hooked on drugs. It was the meth making me do it, because the next day when I opened my eyes, I found myself here in Sedona as this bird. And no shit, the first thing I thought of was how bad I felt for thinking those things about my old mom and my old dad. Looking back on it, I was like another person, someone angry and jazzed for my own desperate needs. I wasn’t Glenn any more. The closest I can describe it is that I was like a zombie.

“For a while I just wandered around, kind of lost and confused. But then I ran into this rhinoceros beetle named Dick. He taught me about meditation and a bunch of other shit right in this very garden. It turns out Dick was a gambler. He spent his days on the reservation spending his paychecks. Things got bad for him when his wife and kids up and split. I’ve met others too. There was a dove named Christine who was addicted to shopping, this Tom guy who loved everything to do with the Phoenix Suns, and what’s weird is they were all cured when they woke up as little critters. Unfortunately I’ve kind of lost track of them. They all kind of wandered off.

“But they’re always bugs and birds. Weird, man. Not sure why that is. Depressed ones are usually reptiles and rodents, like mice and frogs. They don’t cure as easy, and they’re usually pretty pissy, of course. Most of the time, they disappear pretty fast. Most of this I learned from Dick. He was good at sharing information, very patient kind of dude, but he didn’t even know the answer to why. Why was this happening to us? Why Sedona? Did it happen everywhere? Those kind of questions he couldn’t answer. Shit, I don’t know the answers either. Mostly I wander around playing dumb. Just being a bird. And I don’t care.

“For a minute I tried to hook up with this female. But I think I freaked her out too much. I kept trying to talk to her like I am with you. Being a regular quail, it didn’t work on her, though. She kept running from me. I chased her around for a week or so, but she eventually shook me. I called her Gwen, but she’s old news. I just wandered around for a while, at least until I saw you with that hundred dollar bill.”

I finally decided to chime in. “Maybe you can answer this question for me. How long was I out, between passing out as a human and waking up as this thing, how many days have I missed, or years, or what?”

“That’s easy, man. It’s a twenty-four switch. We all checked on that. Dick told me right off the bat too. You weren’t out all that long.”

“I wonder if my body’s still on the floor of my apartment then. I suppose it could be.”

“That I can’t answer, man. No one I remember talking to ever knew what happened to their human form. Could be it vanished when you woke up in this form.”

It didn’t matter anyway, I thought. Whether I had a human body or not, the answer to that question was all the way in Cottonwood.

“If I’ve only been out twenty-four hours, yeah. I have a place.”

“Dude, we should go there!”