I half-wondered if I would turn into a human by the time I sat down to write my email to the patron saint of addictions. My luck, which is pretty bad on my best day, stayed true. 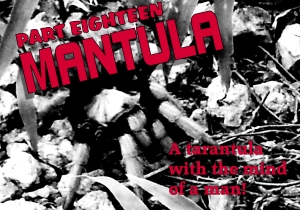 ver happened to change my predicament—despite having done a good deed by knocking out the downstairs neighbor.

Maybe the deed wasn’t as good as I thought.

The police arrived within ten minutes of me beating on the guy. I could hear them downstairs as I set to typing an email to Kolbe. ManQuail, meanwhile, hovered near the window. Occasionally he popped out to sneak a look at the action downstairs. He reported back to me when something interesting occurred.

“Her husband’s being checked out by the paramedics,” Doug said. “But they have her over in the corner. She’s blabbing up a storm and sending some mean-ass looks at her husband.”

I started typing. “Let me know if the cops come up this way, so we have time to hide. I don’t want them to hear me in here typing.”

I did something good a few minutes ago. Not sure if your “saintly” powers can pick up on it, but I thought I’d let you know. Knocked out the downstairs neighbor. He’s been regularly beating up on his wife. Before I took him down, I showed him a sign to stop hitting her. I doubt he will be doing it again.

I did some good. Still in this damn spider body.

Subject: Re: Still a bug

I know what you did. Pretty nice, but you could have gone about it differently in my opinion. Maybe you could have accomplished the same “goodness” without knocking the guy out.

One good deed, in either event, isn’t likely to cut it. Try a couple more. To be canonized in our faith, two miracles are expected in the saint’s name. This whole idea may not work anyway. We’re just guessing at your affliction. Nothing you do may work. It could wear off on its own after a couple of years. There’s just no knowing.

“God dwells in our midst, in the Blessed Sacrament of the altar.”

I looked at the hundred-dollar bill sitting on the kitchen table near the computer. It’s funny how attached I felt to that piece of paper when my hairy little problem began. Since returning to my crappy little apartment, I’d nearly forgotten all about. We were spending my money, sure, but we used my debit and credit cards for everything.

ManQuail laughed. “They’re taking her husband away in handcuffs! Can you believe it?”

“Good. The bastard deserves it,” I said.

I could hear shouts from the downstairs area. It seems the husband wasn’t too thrilled with how his day was turning out. His voice sounded just as angry as it had a while ago.

“Those things attacked me, you dimwits! Why am I being arrested? Why aren’t you looking for that crazy-ass tarantula? This is police harassment!”

I scurried over to the hundred-dollar bill and scooped it into my arms. With it in my possession, I bounced over to the couch and settled down for a nap.

“Let me know when the cops have left,” I told my roommate. “We’re going to go out and do some more good when the coast is clear.”

I fell asleep quickly. I suppose the excitement of the morning had taken a toll on me mentally. My weird body seemed just fine, but my mental state was a different story. I was likely slipping into a funky, feverish form of dementia. I saw the old woman again in my sleep. She cackled and drifted in and out of my vision as if she were made of nothing more than a wispy slip of smoke. But when she did arrive, she arrived screaming. Bits of half eaten, writhing worms flung from her mouth like spittle. I shrank back, horrified by the hag, but continued to watch her gruesome parade in and out of view. There was nothing save a grey fog in my head, besides her, so I had very little choice but to observe the gnarled old woman. I felt as if I’d seen her before, to be honest, but I couldn’t place where. The thing with dreams is they aren’t trustworthy. In them, you can fall in love with someone you hate when you’re awake.

Luckily, I was only asleep for an hour. ManQuail popped onto the couch and shook my hairy legs awake as I’d asked him to. He told me the police were finally leaving the downstairs apartment. I grabbed my hundred-dollar bill, trying to shake visions of the witch from my head.

ManQuail gave me a quizzical stare. “A walk? Where to?”

“Wherever someone needs help,” I told him.

“Sure thing. We could only be bringing danger to ourselves, but what the hell. It’s like I always say. That which does not kill me, makes me stronger.”

I leapt onto his back with the money in hand. “Never heard that one before.”