There are actually tons of awesome things. The desk itself is awesome (being that’s it’s an old secretary number, small and compact, with a door that opens to become desk space). The envelopes and stamps are awesome (because they show how prepared I am), but there are five things more awesome than everything else. That makes them the awesomest things. 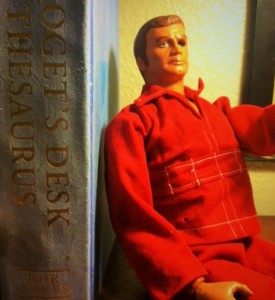 Found at a recent auction at the Goodwill in Salinas, Steve is my best friend and desk monitor. The happy child somewhere in my skull remembers playing with him back when television shows were found on television sets, at a specific time, once a week (as opposed to every episode all at once). Steve guards my stuff with his bionic badassery and represents something I can’t put my finger on. My childhood maybe. And his little eye hole is awesome. Crazy awesome.

Moleskin notebooks aren’t the cheapest notebooks in the world, but they feel super. While I spend (a little) more wisely on most things, I still pop for new Moleskins when I run out. But used smartly, these suckers last six months or more. My current one, shaped to the curve of my left buttock, is full of shopping lists, collection lists, to do notes, and a few interesting thoughts, but mostly it reminds me to pay my car insurance and buy milk, which is why I never leave home without first putting it into my back pocket. The soft black cardboard cover feels like silk to the touch. Try it. It really is awesome. 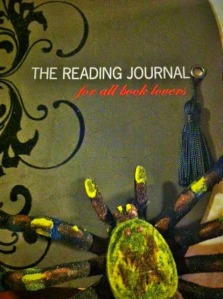 Mantula likes this one too. It’s got a book light in it, magnetic book marks, and the journal itself, which carries a running list of every book I’ve read since owning the journal. I’ve had it about five years now and still haven’t filled it. When I’m feeling really ambitious, usually after a week off work, I might actually write out my thoughts on a particular book within it’s pages. Usually I only write a line. But look at the journal (actually the box that holds all the journal crap). It’s awesome. Does it really matter how well it’s used? 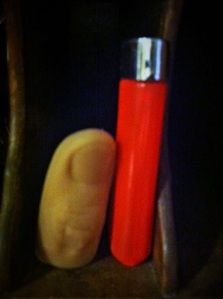 A fake thumb and a fake lighter. The thumb is capable of so much, but mostly for making small cloth squares disappear. It’s a tool to be used when you want to make other people think you’re cool. The lighter, amazingly, serves the opposite purpose of most lighters. Instead of fire, it shoots out water. It’s just that awesome. It’s insanely magical. 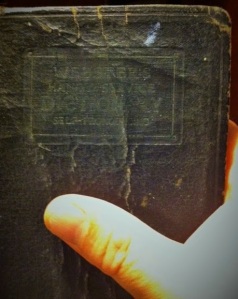 I still use the 1926 edition of “Webster’s Handy-Service Dictionary of the English Language” self-pronouncing edition because it stinks like an old book. And like my Moleskin, the cover (probably made from human flesh) feels smooth to the touch. In its pages are words like “henceforth” and “remonstrate,” while words like “selfie” and “blog” are nowhere. I don’t really have a problem with blog (obviously) – or selfie really. But I do at the same time. It’s weird. The dictionary doesn’t have a definition for awesome, which is a bummer because it is.

2 thoughts on “Top 5 awesomest things on my desk”