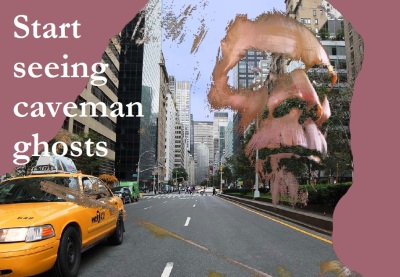 So why are there no prehistoric ghosts? People report ghosts of family pets every now and again, so why are there no ephemeral T-Rex sightings on Fremont in Seaside, California? Some say there are caveman ghosts, of course, but any discourse on them seems rare. Some say prehistoric ghosts are around, but that spirits “dissolve” after a time, so this is why there aren’t many left. Others say guardian spirits (ghosts in charge of helping other ghosts) guide spirits to their final rest. As this would have happened a long time ago, the ghosts of cavemen have long since been put to rest, hence no restless missing link ghosts for instance. If only there were one. Just one would be enough to answer that simple damn question.

The absence of prehistoric ghosts throws a huge monkey wrench into the theory of ghosts for me. I always thought of ghosts as eternal beings. But to read they can dissolve or be set to rest by other spirits puts a Gothic, old English question mark over the whole thing.  It’s similar to why people fear ghosts… as we are all ghosts when you think about it. Only some of us still have our skin. So why should we be afraid of the ones who don’t have their skin? Let’s all act like millennials in this regard, show an insane amount of self-confidence, and believe we are better than older ghosts. So many of them died before the Internet for God’s sake. We’re talking about a segment of once-alive humanity that didn’t know it was okay to say “you’re welcome” without being thanked first. How can they be scary?

I can be an “entity” if I want to be. Kind of like how depression is only a state of mind, right? My telekinesis damn well better kick in if I become a ghost, because it’s been a disappointment so far. I can barely put one foot in front of the other before 9 a.m.

Not to get too weird, but the idea of phantasmagorical goo makes it quite easy to imagine the idea of time travel as well. With the belief in one should come belief in the other, or any number of things. If a soul can live hundreds of years in anguish, making pots of Hamburger Helper fly off a stove top at dinner because they’re pissed about something, then surely it’s possible to bend time and space. I’m pouring a ton of science, without explaining a lick of it, into the ghost theory. But if they are real, there would be real science to explain it, right? Only no one knows what that science looks like yet. Someone has to write the book before we can read it.

I just hope that book is available on my Kindle. The ghost of the Nook may need to read it.