As 2019 beckons us into her titular embrace, I realize my literary to-be-read pile is something of a clean slate for the coming year. There are titles I know I want to read: my usual foray into the new Executioner novels, something by Stephen King, perhaps finish the last two Game of Thrones tomes, etc., What excites me most, however, are the books I have no idea about. The ones that are coming that I cannot foresee. Maybe that’s a bit too deep, but it’s got me on the edge of my seat. What will they be? Some will be culled from the authors below.

I read 22 books in 2018, ranging from the aforementioned Mack Bolan Executioner ebooks to non-fiction titles all about creating tighter sentences. Favorites that didn’t make my top five included Ready Player One by Ernest Cline (who would have thought it would grab me like that?), The Wise Man’s Fear (probably the best fantasy out there right now), and Clash of Kings (and I’m now trudging through the third one, but won’t be done before the new year). Let me glom on to that by saying Stephen King’s The Outsider got my motor running too.

Here’s the usual disclaimer – I read these books in 2018, but that doesn’t mean they came out this year. Some did, of course, but really these are just favorites I laid eyes on over ’18.

I hungered for a blast of literary danger and happened to pick up American Static at the right time. What starts as a deadly and compelling crime thriller; Tom’s dark, street-smart ride takes a grim twist, unfolding to reveal murderous political intrigue, a savage quest for the truth, and it happens to have a bit of romance, the sort that shares needles, but sweet nonetheless.

Snag your shock of Static here.

The Devil’s Necktie by John Lansing

Author John Lansing has created a tough-as-they-come, but wholly believable character, in Jack Bertolino. I’ve read more than one of his adventures, and there are a few, including the latest book The Fourth Gunman. The Devil’s Necktie, the first book, was like a bomb going off. It came with everything us hardboiled mystery lovers crave: guns, intrigue, and the kind of writing most authors aspire to. Start with the first and stay for the rest of the series. Here’s hoping it lasts for a good long while.

My dirty thirties were made all the more pure thanks to the wonderful Mary Russell series penned by Laurie R. King. For me, this is the continuation of Sherlock Holmes we all need. I see it as the only true canon next to Doyle’s original Holmes tales. Adding Mary to his retired life and continuing their shared adventures into my forties have been a true highlight of my middle life. I jumped back into the Holmes/Russell pool this year with Mary Russell’s War, which happens to be a great jumping-on point for anyone interesting in the high-thrill world of these two amazing actioneers.

The Outlaw’s Ransom by Jennifer Ash

The Outlaw’s Ransom by Jennifer Ash is the first in a series of books written under the Folville Chronicles umbrella and it doesn’t disappoint, especially for Hood Heads (fans of Robin Hood lore). This is one hot romp of a tale from Ash and a surprise for me, as it landed outside of my normal assortment of books, which is undoubtedly why I found it memorable and something I’d strongly recommend to others.

Get your hands on it here. Or steal one from an entitled person and give it to someone with want.

Poughkeepsie Shuffle deals with an ex-con named Jeff Nichols, a guy who jumps from a notorious jail back into the bristling criminal elements. But the thing is he’s a likable guy just trying to do right by the woman he loves. This book grabbed me from the get-go, Jeff grabbed me from the get-go, and I turned the pages hoping he’d make it out in one piece, or at least somewhat alive. In Dietrich’s gritty world of noir, there’s no guarantee the protagonist will come out on the breathable side of a coffin. But I had to know, which made this a great read.

Dog Central, AKA our house, got in the news this week thanks to how adorable our furry children are. Want to know a bit more about the canine antics under our roof? Check out the latest edition of the Carmel Pine Cone at your local newstand or zoom in on the image below! 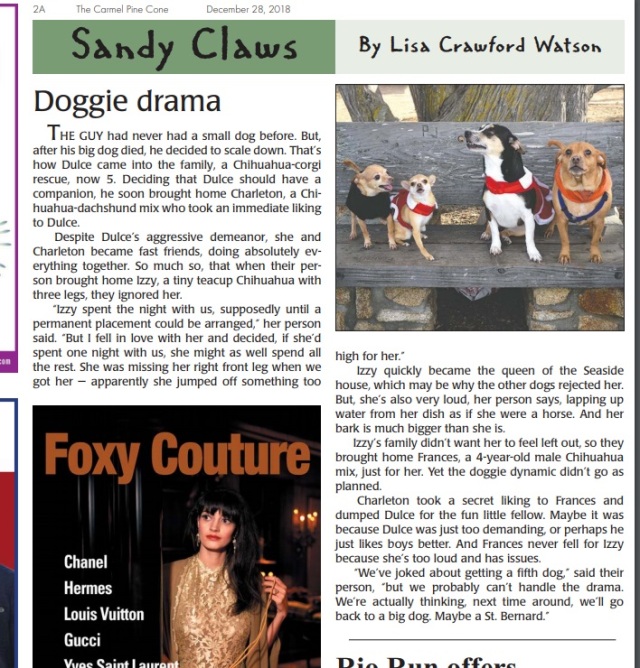 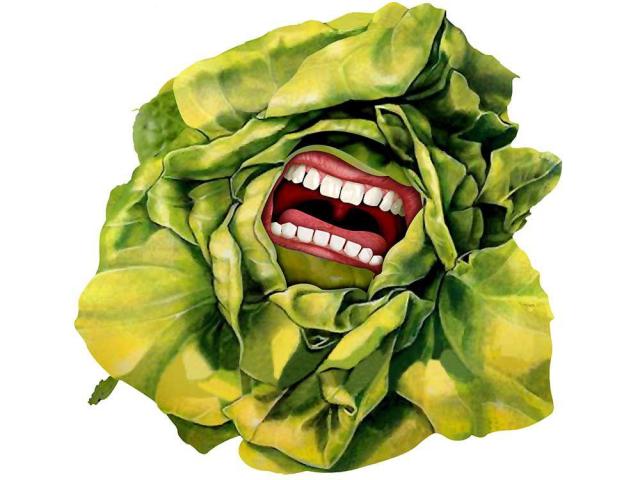 My 101-word short story, The Sticky Drunk, was a runner up in the Monterey Weekly’s recent short fiction contest. And they used a sentence from another entry in another section, which I found pretty cool. Read all the stories here!

I got a chance to chat about my Barker Mysteries recently with author Dietrich Kalteis. Read my interview here!